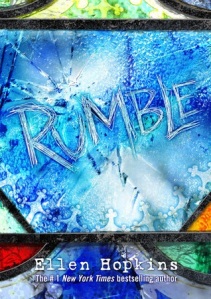 Synopsis from Inside Cover:

Matthew Turner doesn’t have faith in anything. Not in family — his is a shambles after his younger brother was bullied into suicide. Not in so-called friends who turn their backs when things get tough. Not in some all-powerful creator who lets too much bad stuff happen. And certainly not in some “It Gets Better” psychobabble.

No matter what his girlfriend, Hayden, says about faith and forgiveness, there’s no way Matt’s forgiving all those he blames. He’s decided to “live large and go out with a huge bang,” and whatever happens happens. But when a horrific event plunges Matt into a dark, silent place, he hears a rumble — a rumble that wakes him up, calling everything he’s ever disbelieved into question.

With brilliant sensitivity and emotional resonance, bestselling author Ellen Hopkins’s Rumble explores the highly charged landscapes of faith and forgiveness in a story that asks, what if you don’t have faith in yourself, let alone in anyone or anything else? And what if the one person you need to forgive the most is yourself?

Ellen Hopkin’s latest standalone, Rumble, presents a teenage boy who questions the existence of God and his fight against forgiveness. Matthew Turner continues to agonize over who exactly is guilty for driving his gay brother to suicide. None of the people he blames can be forgiven, even when he blames himself. His girlfriend and his mother are super religious, so he must question the validity of religion in his life. As he runs through the philosophical questions of life, he also has to deal with high school and his dysfunctional family and figure out who he is really close to.

I like this novel. Poetry is a love of mine. Hopkins impressed me with the length of her free verse novel. The only other free verse novel I have seen barely came close to two hundred pages. The odd thing about the free verse is that Hopkins indents stanzas to show when a person other than Matt is speaking. When it is more than one person, the stanzas are indented at different points for different people. Matt’s dialogue has quotes around it, while everyone else’s dialogue is only italicized. This is an example on page 32: 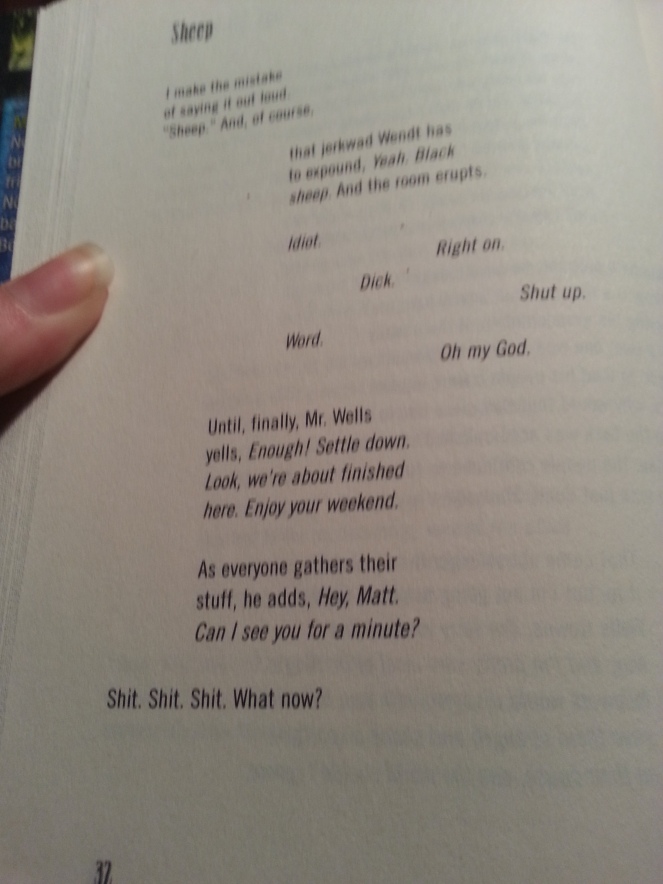 The publisher-advertised synopsis is fairly misleading, plot-wise. I will not explain further beyond that because I’m afraid I will reveal too much. Read the book to understand.

It’s nice to see a YA novel shared from the perspective of a male, Matt (the speaker, since this is poetry). He is the only character, except maybe his mother, who developed. When most of the other characters had a change, it was usually only a change in Matt’s perception of them. I also like that Hopkins allows her teenage characters to not only think deeply about life but also to think about and have sex, party and drink. It adds a greater sense of realism.

There are several themes in this book, but I will only list two. One theme is that communication is key in all relationships. Another theme is that forgiveness is the only thing that will allow you to heal.

The hardcover is beautiful. I don’t believe I would like it in a paperback or an ebook format. I wonder how the formatting would work in an ebook format. As the reputation of ebooks gets worse with grammatical errors, spelling errors, and intended formatting i.e. indenting of paragraphs, I don’t have high expectations out of the ebook edition.

This novel-length string of poems is a must-read for young adults. I’m not sure whether or not I will read this novel a second time in the future, but I will probably scramble to find it again whenever I have another poetry project.

One thought on “Rumble by Ellen Hopkins”

Before it hits midnight, I want to post the books arranged to look like the '78-'99 rainbow flag. How's your June going? #rainbowsjune19 '78-'99 rainbow flag #rainbowbooks #rainbowshelfie #bookstagram #booktography #bibliophile #igreads
There are many Pride Parades happening today, and Albuquerque had one too. Today's flag for #rainbowsjune19 is the Asexual Pride Flag. #junelibrary19 #bookstacksaturday #bookspines #booksbooksbooks #bookaesthetic #bookstagram #beautifulbook #booktography #shelfie #rainbowbooks
I liked the small fairy tale world of 'The Girl from the Other Side' by Nagabe. The review of which posted on my blog. It reminds me of a specific trope that I've seen more in fanfiction than in novels. I like that this Outsider is taking care of her and worries about her. More, I love the dark and magical art. #creativebookstagram If you like that, try this #WildAdventuresJune19 Vin: epic fantasy #AmpersandJune19 night #thegirlfromtheotherside #nagabe #shoujomanga #fairytaleretelling #otaku #booksbooksbooks #bookstagram #yabookstagram
So I posted my review of 'Five Feet Apart' the book today. Something that I didn't get across in my review was how much it annoyed me that for most of the book it was the six feet rule, so I didn't get the point of the title until the last stretch to the climax. It should have been a clue to the plot, but I didn't see it. Otherwise, I really love this cover because of its significance to Stella. #fivefeetapart #yareviews #contemporaryya #cysticfibrosis #booksandleaves #titles #booktomovie #diversebooks #yabookstagram #romance #beautifulbook #bookstagram #booktography #bibliophile #igreads
Welcome to the first day of June! Let's start the month with a rainbow. #rainbowsjune19 modern rainbow flag #rainbowshelfie #rainbowbooks #shelfie #bookaesthetic #yabooks #rainbowrowell #jkrowling #bookstagram #booktography #igreads
'Lotus Flowers' is the poetry collection I read this month. I'm one step closer to completing the PWOW reading challenge! #AmpersandMay19 paperback #poetry #heartbreakpoem #bookstagram #booktography #bibliophile #igreads #debutauthor #lotusflowers #paperback