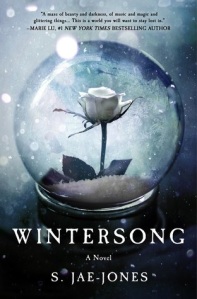 In this beautiful retelling of multiple stories, a girl becomes a woman who learns who she is, works through the trials of a relationship, and fights for life. The Goblin King has been a legend that has haunted Liesl all her life as the Lord of Mischief, a muse, and her playmate. Liesl and her sister, Käthe, go to the market where they spot strange men selling tempting fruit. While Liesl has her back turned, Käthe eats the fruit and fades away from the family on the night of their brother’s major audition. The only one who can get her back from The Goblin King is Liesl, and she only has a season to do it.

The beginning of Wintersong is a retelling of both Christina Rosetti’s “The Goblin Market” and The Labyrinth (1986), but the rest reminds me of the Persephone myth. At times, Liesl’s relationship with the Goblin King also reminds me of The Phantom of the Opera (2004). While the novel was influenced by a lot of media, it stands out for uniquely weaving its own fairy tale.

Liesl, a.k.a. Elisabeth, has resigned herself to her life in the inn and to help her brother reach the world stage. As much as she dreams of being a famous composer, she has to place all of her hopes into her brother, the one her father invested musical training into. There’s something sweet about the devotion she has toward her brother and something sad about the relationship with her father.

It was interesting to see a contrast between her childhood self, the woman she is at the inn, and the woman she becomes in the book. Since YA is all about coming of age, this novel hits the nail on the head with this growing up. She becomes more sure of herself.

The one thing that bothers me is how sex changes Liesl’s character. It pulled me out of the story and didn’t feel realistic. I can believe that sex would do something to a character, but I don’t buy that it alone would pull someone out of a depression and renew her willingness to compose music.

Käthe was unexpectedly developed quite a bit. I like learning more about her and seeing the slightest bit of remorse. She’s a great character, but I didn’t expect much development. After getting that taste of who she really is, I wanted more. I want to see that side of her that really hates the life that’s been created for her and that sisterly love.

While the human characters have a lot of development, I wanted more from the Goblin King, but that’s part of the tension in the book. He and Elisabeth have an interesting relationship in the last half of the book, and this relationship demonstrates that people change, especially from childhood. The contrast between the figure of the Goblin King and the man who wears the crown is interesting and hard to tear through. Elisabeth has an understandably hard time getting to know him, and the required sacrifice makes his mood swings even more understandable.

The motif of music is superb and truly shows a heart for music. The emotions and imagery applied to moments where music is played and shared shows that the characters and the author love music. I also love how music plays in this book. It’s not just Josef. It’s Liesl’s and the Goblin King’s music, and it helps with character development.

The ending moved a little too fast and was a little annoying. It feels like the author felt a need to end it but also couldn’t figure out another way to make it to the start of the sequel. For the trials that come with the ending, it was a little cheap of how she chose to wrap it up. It appeals to the romantic in me, but it annoys the cynic who was looking for something like this to happen.

I’m looking forward to Shadowsong, which comes out in 2018. If you like books that feature music or any of the stories that influenced this novel, you will probably like S. Jae-Jones’s Wintersong, but you might find those parts a little predictable.

9 thoughts on “Wintersong by S. Jae-Jones”