In the online book community, we often talk about buying and selling ARCs. As far as I’ve seen, most agree that it’s unethical. I tend to agree, but there are always new situations that make you think about this more, like buying and selling them used.

I’ve been disturbed for a few years that the used bookstore in my local library has a special section marked off for ARCs, where they usually charge $4 per ARC that will be or has been published this year. Older ARCs might be mixed with the rest of book collection and cost less. I tend to ignore the fact that a used bookstore or a thrift store might sell an ARC because I think it’s easy to miss “uncorrected proof” or “advanced reader copy” labels, and not everyone knows what they mean. My overall issue is that this store knows what they are and deliberately marks up the prices for ARCs of newer books (see the photograph below). 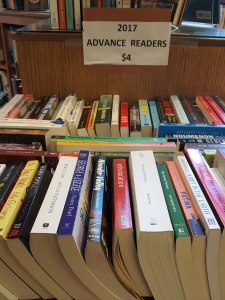 We normally consider buying and selling ARCs unethical because they cost the publisher and author, because they are intended to raise hype for the new book, and because they say “NOT FOR SALE.” On that last point, there have been large bookstores that ignore those words and sell them anyway.

Are the ethics different when it’s a used bookstore? The used bookstore I mentioned earlier donates its earnings to the library. The sales of used books don’t go back to the publisher or the author anyway. Then again, a good portion of those ARCs on that table have not been released yet. People buy them, though I’m not sure how many are aware of the ethics around this.

If you would like to read more about  ARCs, here are some sources:

Before it hits midnight, I want to post the books arranged to look like the '78-'99 rainbow flag. How's your June going? #rainbowsjune19 '78-'99 rainbow flag #rainbowbooks #rainbowshelfie #bookstagram #booktography #bibliophile #igreads
There are many Pride Parades happening today, and Albuquerque had one too. Today's flag for #rainbowsjune19 is the Asexual Pride Flag. #junelibrary19 #bookstacksaturday #bookspines #booksbooksbooks #bookaesthetic #bookstagram #beautifulbook #booktography #shelfie #rainbowbooks
I liked the small fairy tale world of 'The Girl from the Other Side' by Nagabe. The review of which posted on my blog. It reminds me of a specific trope that I've seen more in fanfiction than in novels. I like that this Outsider is taking care of her and worries about her. More, I love the dark and magical art. #creativebookstagram If you like that, try this #WildAdventuresJune19 Vin: epic fantasy #AmpersandJune19 night #thegirlfromtheotherside #nagabe #shoujomanga #fairytaleretelling #otaku #booksbooksbooks #bookstagram #yabookstagram
So I posted my review of 'Five Feet Apart' the book today. Something that I didn't get across in my review was how much it annoyed me that for most of the book it was the six feet rule, so I didn't get the point of the title until the last stretch to the climax. It should have been a clue to the plot, but I didn't see it. Otherwise, I really love this cover because of its significance to Stella. #fivefeetapart #yareviews #contemporaryya #cysticfibrosis #booksandleaves #titles #booktomovie #diversebooks #yabookstagram #romance #beautifulbook #bookstagram #booktography #bibliophile #igreads
Welcome to the first day of June! Let's start the month with a rainbow. #rainbowsjune19 modern rainbow flag #rainbowshelfie #rainbowbooks #shelfie #bookaesthetic #yabooks #rainbowrowell #jkrowling #bookstagram #booktography #igreads
'Lotus Flowers' is the poetry collection I read this month. I'm one step closer to completing the PWOW reading challenge! #AmpersandMay19 paperback #poetry #heartbreakpoem #bookstagram #booktography #bibliophile #igreads #debutauthor #lotusflowers #paperback