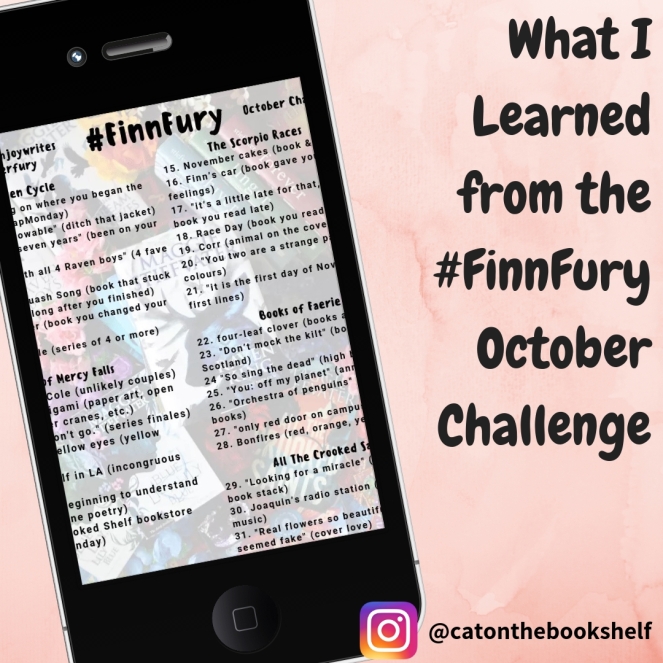 Last month I participated in the #FinnFury October Challenge, which was hosted by Cait @ Paper Fury and Miriam (a.k.a. Finn) @ Miriam Joy Reads. Instead of doing a Halloween-themed challenge for October, they decided to make a challenge focused on one author they love: Maggie Stiefvater. See Cait’s post below for the announcement.

I am a bucket of EXCITEMENT right now!! @miriamjoywrites and I are co-hosting an October challenge! I confess we were both driven to this because neither of us cares about Halloween 😂 and we both care a little (translation: a LOT) about Maggie Stiefvater books. So a Stiefvater-themed challenge?! I think YES. . . We’re both shiny newbies to hosting a challenge and super much hope you’ll join us.💛✨ I also did up two backgrounds because I can’t decision ok. . . HOW TO JOIN IN: ✨ use the hashtag #FinnFury ✨ post photos of ANY BOOKS to fit the prompts! (Doesn’t have to be anything to do with Stiefvater books if you don’t want! You don’t even have to have read them haha.) ✨ Post as little or as many days as you want. ✨ I’ll do plenty of Story shoutouts! ✨If you want to share about the challenge I will love you more than the others. SO MUCH MORE. . . Q✨Ok so tell me if you like Halloween or Maggie Stiefvater or BOTH. And will you be joining us?! *puppy dog eyes* . . @bookstagramchallenges #bookphotochallenge #bookstagramchallenge #octoberphotochallenge #bookstagramphotochallenge #readingchallenge #bookstagram #bookblogger #booksbooksbooks #bookaddict #bookishchallenge #maggiestiefvater

It had been a while since I had last attempted to join a #Bookstagram challenge, but I was confident that this was one I wanted to do and that I would actually do it. One of the biggest changes was me using Instagram more and posting photos more often. As I started participating, I realized that my process for posting pictures on Instagram was changing and that I was learning from this hashtag. Let’s dive in to what I learned from this awesome challenge.

Participate as little or as much as you want.

I guess this can be a rule for most challenges, but this was the first time that I knew and felt that it was true. Every other month long challenge that I did in the past felt like one that I was supposed to participate in every day, even though I never did.

Cait and Miriam made it clear that we could participate as little or as much as we wanted, and that made me more motivated to take photos that fit the challenge. It was freeing for me to participate more on Bookstagram but not have to be necessarily concerned about meeting the daily theme. There were some days where I didn’t post something relevant for the challenge, and it was great.

I learned to start taking pictures in bulk, which is easier to do when you have an idea of what you want the post to be about that day. I noted the challenge and then started taking pictures of the books that fit the challenge. Sometimes I would edit them through the basic editor on my phone and sometimes I would just edit it through the IG editor on the day I posted it.

Then I would make memos on my phone of what I wanted the captions to say, including hashtags. When that day came, I would just open the memo, copy the text and then paste it into Instagram.

Because I planned ahead, I also learned to . . .

While I wrote those drafts of posts ahead, I started researching relevant hashtags to my topic. I would open either the Instagram app or the website and start playing with hashtags and checking out those in others’ posts. For example, when I shared a photo of The Royal Diaries series, I discovered that #oldiesbutgoodies and #feelingroyal were active hashtags and that #royaldiaries was less active and not used much. I was also surprised to find that #historicalfiction was more active and used than the #histfic I learned about for Twitter hashtags.

I’ve been trying to use emojis more in my IG posts. As I tried to use them more, I learned that the way emojis appear on my phone don’t render the same on Instagram. As you can see below, the skull emojis I used in the photo for Day 6 of the challenge show 3-D skulls on my Android phone, but the desktop rendering shows them only as 2-D skulls. 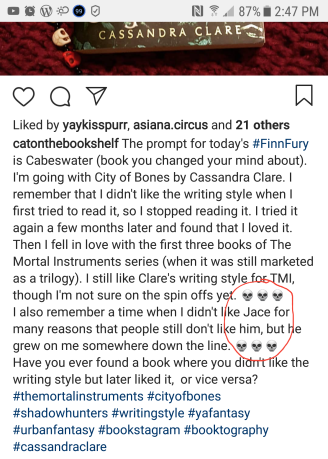 Screenshot from my Android phone. 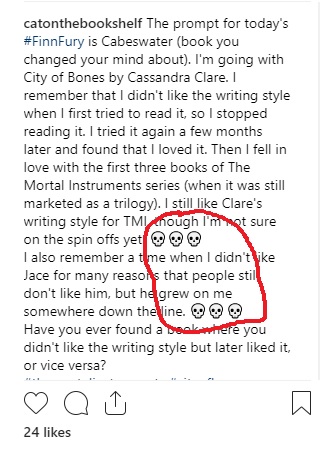 Screenshot from my laptop.

This isn’t as drastic as some other emojis. One that happened was a little devil with red hair and bat wings on my phone that turned into an red, angry face with horns on the computer. I edited it out of the caption shortly after I realized how it rendered. So, now I have to keep in mind how emojis appear online and on mobile.

Find inspiration in others’ posts.

People on Bookstagram are very creative and skilled. New photos are posted every day, and they are beautiful. Learn from your fellow Bookstagrammers.

I find writing captions difficult, so I’ve tried learning from others’ captions. I’ve tried using more emojis, and that makes the captions a little prettier. I’m not sure that I’ve gotten the hang of it, but I like the idea of using them. I also see that many people do QOTDs (Questions of the Day), though I’m not sure that they lead to more discussion in the comments. It’s fun learning to get more creative with them than just, “What are you currently reading?” I have tried learning to do that.

The major lesson I see in every “How to use Bookstagram” post says we should learn from others’ photos. That is true, but it takes experimentation. The furthest I have gotten is trying to incorporate more props into my photos and taking pictures of books from interesting angles.

I don’t know that I love how this turned out, but it was fun to set this up. It’s helping me find a style and see what works.

Let’s talk about likes and comments.

Something that was disappointing to me was that posting more often seemed to decrease likes on each photo about halfway through October. This can happen for any number of reasons, of course, but it is something to note. On the other hand, there are more views and likes for the entire month. It’s just something to think about.

You learn about other challenges.

It may be October, but the challenge doesn’t have to be Halloween-themed.

That was the premise of this challenge, but I think it’s something to keep in mind if you ever wanted to create your own challenge. Just because one month is heavily associated with one holiday doesn’t mean your challenge has to focus on it if you don’t care about that holiday.

And you know what? It was fun to not have to focus on the holiday of the moment, as much as I love Halloween. You’re free to do what makes you happy.

Overall, I had much more fun using Bookstagram this month. I had more fun taking pictures, writing captions, and scrolling through others’ photos. This challenge made Bookstagram more fun for me and more willing to post more often. Thank you, Cait and Miriam, for making such a fun and unique challenge in October.

What have Bookstragram challenges taught you?

6 thoughts on “What I Learned from the #FinnFury October Challenge”