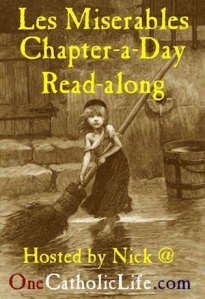 When I read a title like Les Misérables, I assume most of the focus on this book will be about miserable people or miserable conditions. Even though I entered this knowing the first section would be about “An Upright Man,” I did not expect these chapters to make me feel warm toward any character in the book, even an apparently upright man.

In case you are wondering why I am talking about a section of Les Mis today, I have challenged myself to read this massive novel in one year. If you would like to join the read-along (I don’t think it would be too difficult to catch up at this point), you can go to the sign-up page here. While I’ve stumbled on reading Les Mis daily, I’m caught up and have been enjoying it so far.

I’ve come to love and appreciate Monseigneur Bienvenu, the bishop and upright man. I didn’t expect to like him, but he is truly a good man in this book. He’s as saintly as they come.

I’m not sure if he’s the bishop we see in the musical who gives Valjean the silver, but he must be important if we spent the first fourteen chapters on him. Is he going to be one of the beacons of hope in all of the upcoming misery?

I’m going to share some quotes that caught my interest in this section.

To be a saint is the exception; to be upright is the rule. Err, falter, sin, but be upright.

To commit the least possible sin is the law for man. To live entirely without sin is the dream of an angel. Everything on this earth is subject to sin. Sin is like gravity. (Hugo 13)

On a more religious note, I like this quotation. It’s impossible to be perfect. This is much more forgiving to us being human.

He did not seek to drown grief in oblivion, but to exalt and dignify it through hope. He would say, “Be careful how you think of the dead. Don’t think of what might have been. Look steadfastly and you will see the living glory of your beloved dead in the heights of heaven.” He believed that faith gives health. He sought to counsel and calm the despairing by pointing out the Man of Resignation, and to transform the grief that contemplates the grave by showing it the grief that looks up to the stars. (17)

This strikes me because I don’t think we talk about grief enough today. I think this is a beautiful way of describing grief and one man’s way of counseling the grieving and the despairing.

I’m not sure that this paragraph has any deep meaning, but I liked it for its themes of concern for others and of forgiveness. The bigger thought that came to my mind was that it’s similar to the Ninety-Nine Names of God in Islam.

Let’s move on from the overtly religious quotes.

One felt that here was a man tested by life. Though so near death, he appeared healthy. His bright glances, his firm speech, and the muscular movements of his shoulders seemed almost enough to disconcert death. Azrael, the Islamic angel of the sepulcher, would have turned back, thinking he had the wrong door. G— appeared to be dying because he wished to die. There was a liberty in his dying; only his legs were paralyzed. His feet were cold and dead, but his head lived in the full power of life and clarity. (38)

Something in this passage makes me feel remorse and affection for this old man. The masses in the book have wished him dead for a long time and the bishop seemed to have maybe held this opinion before speaking with him, but I think this wording was designed to make us feel like the bishop will over the next few pages.

For after all, we repeat, men like advancement. A saint addicted to abnegation is a dangerous neighbor; he is very likely to infect you with an incurable poverty, a stiffening of the articulations necessary to advancement, and in fact, more renunciation than you would like; and men flee from this contagious virtue…. We live in a sad society. Succeed—that is the advice which falls drop by drop from the overhanging corruption. (51)

This quote makes me sad. Is this an overall commentary that people flee from what is opposite to their own goals and desires? Or, does this virtue of abnegation perpetuate a problem in the way that success is suggested to create here?

Monsieur Bienvenu was simply a man who accepted these mysteries without them, without stirring them up, and without troubling his own mind about them; and who had in his soul a deep respect for the mystery that surrounded them. (58)

I think this is one of the accurate descriptions of the dear bishop. While I don’t agree with the entire philosophy, this makes him a little more endearing. It’s appreciating that there is a mystery at all. It’s almost magical.

If you’re interested in learning more about the dear bishop, Nick, the host of this read-along, wrote about how the bishop almost wasn’t such a saintly character and compared him to Pope Francis.

How is the read-along going for you? Have any quotes stuck with you?

12 thoughts on “Two Weeks into the #LesMisReadalong: An Upright Man”