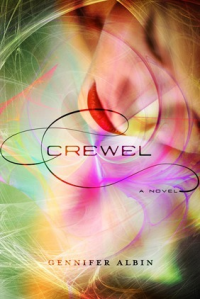 That’s what the other girls whisper behind her back. But sixteen-year-old Adelice Lewys has a secret: She wants to fail. Gifted with the ability to weave time with matter, she’s exactly what the Guild is looking for, and in the world of Arras, being chosen to work the looms is everything a girl could want. It means privilege, eternal beauty, and being something other than a secretary. It also means the power to manipulate the very fabric of reality. But if controlling what people eat, where they live, and how many children they have is the price of having it all, Adelice isn’t interested.

Not that her feelings matter, because she slipped and used her hidden talent for a moment. Now she has one hour to eat her mom’s overcooked pot roast. One hour to listen to her sister’s academy gossip and laugh at her dad’s jokes. One hour to pretend everything’s okay. And one hour to escape.

Because tonight, they’ll come for her.

In Gennifer Albin’s Crewel (Crewel World series), Adelice Lewys has the ability to weave Arras, the very fabric of time and reality, without a loom. She’s caught during one of the testing sessions, but her parents delay the inevitable by trying to run. The penalty: death. However, Adelice is the exception and she doesn’t find out why until later on in the book. She’s harshly brought into the Spinsters’ home, where she and others are trained to weave Arras while living in luxury. Already attracting the attention of important officials, how can she maintain some control over her life?

I listened to the audiobook (narrated by Amanda Dolan). She reads it well, but I find it harder to keep track of what’s happening when I don’t have the words in front of me. If I read this again, I will read the physical book.

The book is set in a post apocalyptic world created from the remains of Earth. The only aspect of the world building that wasn’t really explained was what the resistance groups were doing.

Part One of the book is misleading about who the important characters are (they’re important but they aren’t as easy to care about). Jost and Erik are underdeveloped. I would have liked to see more of Pryana. Even though their budding friendship ended, it would have been nice to see what she was up to or if she would turn into a foil to Adelice. The world building is good, but I wish there was more character building as well.

All romance is muted. This is mostly due to the chastity laws for the Spinsters. The romance between Adelice and Jost is somewhat forced, especially where it concerns the end.

The major theme of Crewel is control over everything. The government uses the Spinsters’ and the Creweler’s control over Arras to make the world into the “perfect” world. They control life, death, who people are and try to control minds.

I recommend this to fans of dystopian novels, namely fans of The Hunger Games.