Thus far my favorite webcomic has been Killing Stalking by Koogi, and it’s also one of the most viewed posts of all time on this blog. I’ve been meaning to really try to read through more webcomics online, but I haven’t found much success in finding another long one that I like and want to follow.

So, I set out to find some complete, short webcomics. When I stumbled upon the Smack Jeeves webcomic database, I found several comics that were under 50 pages, though I was mainly looking for webcomics under 100 pages. Interestingly, most of the stories I found were in some way speculative fiction. Below are three short webcomics that I read this week. 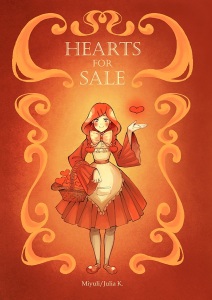 This 26-page webcomic is a heart-warming tale with several big twists. It starts with a girl selling hearts. As I read it, the story shifted from a potential Boy’s Love story to something circular and a little tragic. At first, I thought the story would mostly be about the girl on the cover, but it mostly focuses on the Heartsmith, the man who repairs hearts. They are also pretty flat and symbolic, but I love how the twists in the story make up for that. It is not predictable, and each twist nicely surprised me. It’s a beautiful short story if you want a quick romance tragedy to read.

On the artwork side, Miyuli was thoughtful with the largely red-and-brown color palette, and I like that more color returns to the man who goes to see the Heartsmith. The characters are drawn in a fairly anime style, but Miyuli stuck to a softer physical appearance. The art is beautifully detailed in certain parts. For example, there was a cake drawn down to the details inside the cut strawberries. I love the Victorian and steampunk appearance of the setting.

Between the Raindrops by DaughterOfOwls (Tashina Kalmbach) 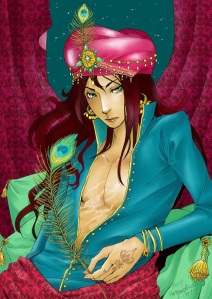 I’ve read through the fifth chapter of DaughterOfOwls’s Behind the Obsidian Mirror, which I’m loving, so I decided to read this one too. Between the Raindrops features a tiger named Kanendev, who is also the God of the Forest. He knows that Prince Dhirendra enters the forest every season to try to kill him so that he can become king. Their fights are bloody, but Kanendev won’t kill the prince because he loves him. So, he tries to find a way to be with the prince without either having to kill the other.

This is a beautiful, romantic webcomic. I love the romance and storybook feel to the narrative. The characters are flat, but this feels like it could be a fairy tale where it would be expected.

After I read this, I found a comment by the creator on the first page that said: “I decided to do the whole story in a set of only three colors minus the white and black: grey/green, orange/yellow and a kind of magenta/red mix.” I noticed her selectivity with colors, but I didn’t realize that it was this much of a rule for this story. The thoughtfulness of this comes through very well to create beautiful pages. I also loved how the impressionist/poster-style drawings added to the storybook feel of this story. It even reminded me of Peter Pan’s parents’ origin story in Pan for the tone and plot.

Based on a Finnish myth, this webcomic focuses on the myth of the Näkki, which is similar to the idea of a Siren but without the alluring appearance. It’s a combination of horror and cautionary tale about avoiding it and performing its rituals appropriately. Because this story retells a Finnish myth, I’m not surprised that there isn’t much character development.

I loved how the dark artwork fit the horror genre. I’m not sure what to think of the drawings of the protagonist girl since what could be endpapers show a polished drawing of the protagonist, but throughout the story she is drawn more roughly. However, the setting is detailed, well-drawn and fitting of the genre. Even the monster itself is well-drawn for the scribbly and scaly parts we see of it, and it is creepy.

At the moment, I see a common phenomenon of these shorter webcomics having static characters. I wonder if that is because of the available space for a story and genre. On the other hand, these stories surprised me, and I like them as they are for their narratives.

Which webcomics should I read next? Which other webcomic websites should I visit?

7 thoughts on “Mini Webcomic Reviews: ‘Hearts for Sale,’ ‘Between the Raindrops,’ and ‘Näkki’”