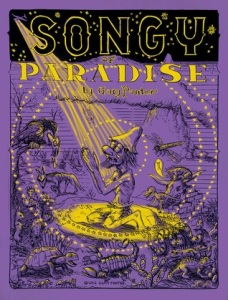 For months, I’ve thought about whether I would write a review for this graphic novel or not. I’m unsure how fairly I can rate and review the book because it was one of two major texts that I analyzed for my final project in my independent study last semester. Now I think it’s time to write this with the note that I’ve read and analyzed it too many times to feel particularly objective about it.

Songy of Paradise, by Gary Panter, is an adaptation of John Milton’s Paradise Regain’d, which retells Jesus’s temptations in the wilderness. After learning that God is his dad, Songy—or Hillbilly Jesus, as I like to call him—decides to go on a vision quest in the wilderness to meet him. Satan finds out and decides that he will tempt God’s only begotten son.

I first want to comment on the aesthetics of this graphic novel. Though this book is short, it’s big. These are the listed dimensions on the Fantagraphics website: 11.25″ x 15.25″. It was challenging for me to carry it around so that I could read and look through it at my leisure. Translation: It didn’t fit in my backpack.

For the size, Panter makes brilliant use of the page, with several full-page images. He has experimented in previous works with page layout, so he was deliberate with each page in this book. Each page and panel is significant, and the hatching and cross-hatching is beautiful for giving more detail. A couple of the pages would make great posters too. 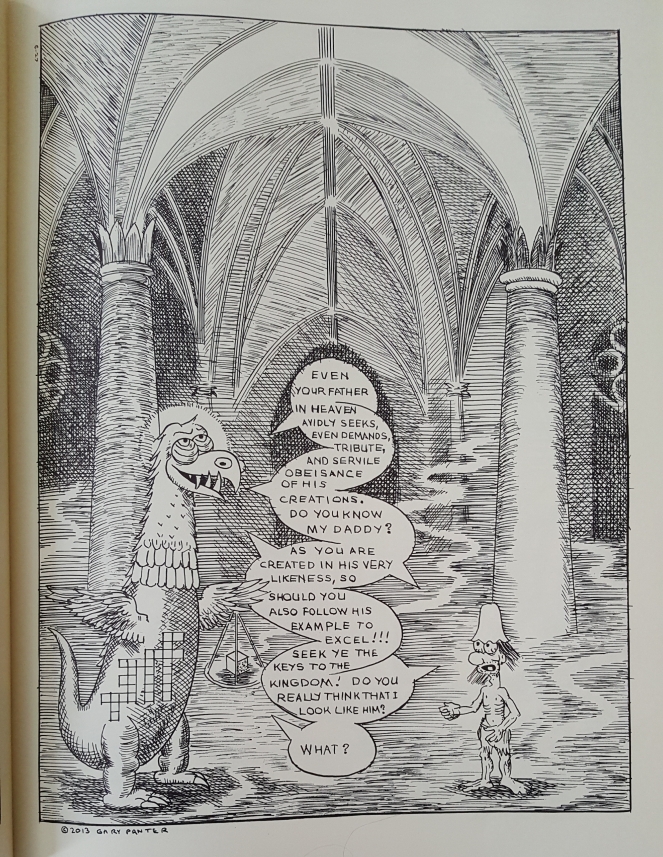 The two main characters are Satan and Songy, and the conflict mostly stays between them. Satan changes shape throughout the story, but he is easily recognizable by the crossword puzzle patterns on his body. Songy doesn’t change much in the story, but I pin that on his stubbornness and his role as Jesus resisting temptation. What’s interesting is that the first few times I read through this, it appears that they aren’t really communicating with each other, but they are. I laughed at most of Songy’s remarks to Satan’s attempts at persuasion.

As an adaptation of Paradise Regain’d, this book was is clever. It sticks to the major plot points and character development. Mary even makes an appearance in this adaptation too. It’s also funny in great places.

Because Songy of Paradise is an adaptation, I’m not sure how it comes across to someone who has not read Milton’s original work. However, I am under the impression from a roundtable in The Comics Journal that if you have read Panter’s earlier adaptations of the Divine Comedy, starring Jimbo, you will probably appreciate the similarities and differences between the two cousins, but I haven’t read his earlier works.

I enjoyed Songy of Paradise from an adaptation perspective, and I love the detail it has for being such a quick read. I think you will enjoy it more if you have some experience with Milton or Panter’s earlier works, but it is a fun book on its own.