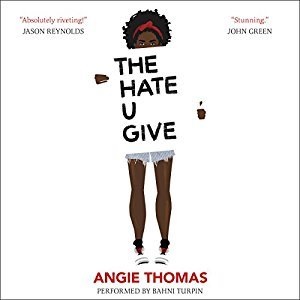 In February I saw several glowing reviews for the audiobook version of The Hate U Give, by Angie Thomas, and I decided to put myself on the waitlist. It was worth the wait to read this powerful book. One night Starr Carter finds herself the only witness to the fatal shooting of her childhood friend, Khalil, at the hands of a police officer. As the story hits the national news with speculation about what Khalil was really like, Starr has to decide what to say in the wake of intimidation from some cops, a drug lord and her friends.

The narrator is talented.

Bahni Turpin is a fantastic narrator, and she makes me want to listen to more audiobooks. I love the way she performs the voices for each character. Each character has a unique voice, and they change when they need to for certain emotions. Her voice is perfect for those big moments, like Khalil’s death and moments when Starr cries. If I ever take up following narrators, she is one of the narrators I will follow.

I haven’t read family dynamics that get into half-sibling relationships. I was excited when Starr described how she and Kenya share a brother but aren’t sisters, and I like that it brought up little nuances that can exist about “my brother” versus “our brother.”

Her parental figures are great too. I loved that the book included at least one set of parents trying to take the high road. It was also nice to see the involvement of another figure that Starr legitimately saw as a father. It helps with the tension of the novel.

The aftermath of Khalil’s murder was powerful.

The scene of the fatal shooting was powerful alone, but the aftermath that follows gets at “the hate u give.” I got angry with Starr and on her behalf as 115’s actions were defended or justified. Besides the media and general public’s reaction, the rest of the world reacted. Neighborhoods reacted differently. Some people were insensitive in their comments. Protests happen. More importantly, Starr’s family does what they can to help their daughter through this. Each of these issues shed light on different aspects that could affect the issue, and it made for powerful rising action. I liked how we forced to see Starr confront these issues in the context of the news, her friends, at school and with family.

Specifically, I liked how her friendships and her boyfriend played into the aftermath. The interplay between her school life, her neighborhood and her boyfriend make the theme clearer the issues this country faces over racism, among other things, like King’s gang. It examined more complex issues aside from the newspapers and general grief about Khalil’s murder.

This is a book of the times, and it is powerful. I believe it is worth reading as a physical copy or an audiobook, but the latter will have talent of Bahni Turpin to make it great.