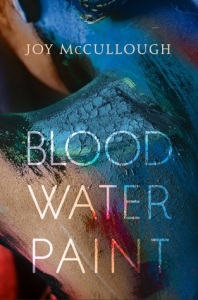 Warning: The content of this book includes scenes of rape experienced by the protagonist, and she also faces torture for accusing her rapist.

Artemisia Gentileschi was an Italian Baroque painter when women were not readily accepted. One of her best known paintings is Judith Slaying Holofernes. She was raped by Agostino Tassi, and participated in prosecuting her rapist. She was one of the women I wanted to know more about as I took AP European History in high school, and I was interested in seeing what Joy McCullough did with her life story. With her life story in verse, I found Blood Water Paint to be a quick, good read.

The book concerns the portion of her life where her rapist enters her life and the aftermath of the trial. I was surprised because the first chapter of The Passion of Artemisia by Susan Vreeland, the only chapter I read in the book, starts mid-trial and gets into painting Judith. McCullough’s novel-in-verse starts with her painting at home and dealing with a callous father. Her Artemisia seems more frustrated but persevering in her circumstances, but the two Artemisias start at different ages. That’s the extent of talking about another book in this review.

The other characters in Rome are flat. Maybe it is not as important for the emotional aspect of poetry, but as a narrative, it is disappointing for only one character to be rounded. Susanna and Judith are somewhat rounded with their perseverance and strength, but they did not change as characters in the text. Their parts were more interesting for the broader scope of character development in biblical interpretation.

Susanna and Judith make some their first appearances in Artemisia’s late mother’s stories. There are short sections of prose every now and then to represent those stories. I loved these for spelling out the interpretation that Artemisia believed in for her artwork and healing from her rape and trial. Unfortunately, I think these left stronger images and emotions in my mind than McCullough’s verse did, though the verse itself was interesting.

On that note, I thought the title was well picked because Artemisia thinks a lot about blood, water and paint. As motifs, they truly compound her thoughts about women’s place in the world, justice, rape and healing.

If you are looking for a quick read, like novels-in-verse, or fast reads, you should give Blood Water Paint a chance.

One thought on “Blood Water Paint by Joy McCullough”