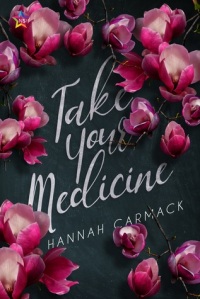 I received this electronic Advanced Reader Copy from the author in exchange for an honest review.

In this Alice in Wonderland retelling, Alice Liddell has “vasovagal syncope – a fainting disorder which causes her to lose consciousness whenever she feels emotions too strongly.” Her mother, a cardiothoracic surgeon, cannot cure her, but some new witchy friends think they can. Take Your Medicine, by Hannah Carmack, is an okay retelling with a focus on disability and without going Wonderland.

Our Alice of the novella is legally named Alice Liddell, but she goes by “Al.” She is a person of color who has vasovagal syncope. I expected this fainting disorder to either happen along a magical adventure or be the thing that keeps sending her back to Wonderland in a dream state. Instead, the two witches she meets try to treat her disorder with holistic medicine. That was an interesting turn of events, but the way it’s executed doesn’t scream Alice in Wonderland or a major twist on it, like a new way to examine the relationship between mother and daughter. It sort of gets into comparing holistic medicine and traditional medicine, but it doesn’t go far enough for it being the driving force of the plot.

The other primary characters are her mother, a.k.a. the Queen of Hearts, and two witches who live nearby. Unfortunately, they’re all flat. The mother is just there for her daughter, does surgeon things, and reads classics. She didn’t change or even serve as a great antagonist to the holistic medicine her daughter wants to use. The two witches, Rabbit and Kat, are quirky, but I couldn’t tell them apart. They try to help Al and invite her to do things with them.

At 60% of the way through the book, there were sudden shifts in point-of-view that happens only once toward the beginning of the book. This is indicated with a name of a character at the start of a chapter, but it never happens on Al’s chapters. This is made more confusing to tell the perspectives apart, but it could have changed in time for the release today.

Since those perspective shifts happened at the end, I need to talk about how unsatisfying the ending was. What was that ending? It ends abruptly. The end is illogical about certain character reactions (not in a dream-state way) and doesn’t feel concluded. It could have used maybe 20 more pages to flesh out that ending.

On a minor note, the cover is beautiful and looks like something that would go on an Alice in Wonderland retelling.

Take Your Medicine is an okay book, but I don’t recommend it. You might have a different perception of this book than me if you’ve read Alice’s Adventures in Wonderland because I haven’t read it.

One thought on “Take Your Medicine by Hannah Carmack | eARC Review”