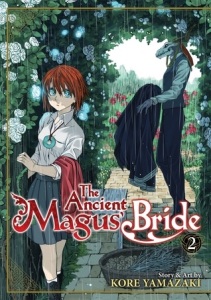 No longer a slave but now an magus’ apprentice, Chise Hatori has been introduced to people and creatures of many sorts, including fae royalty. We start where we left off with the King of Cats and the blight haunting the cats’ home. As the story goes on, she learns about more of the cruel effects of being a sleigh beggy, a person who can generate and use tremendous magic. This second volume of The Ancient Magus’ Bride, by Kore Yamazaki, continues one story line and shows more of the side effects of being a sleigh beggy.

This book wasn’t as magical as the first one was to me. Chise and Elias didn’t go to as many places or meet as many people. The only thing that really stood out to me as

majorly expanding their universe is the fae royalty. At least, Oberon and Titania are different from their usual representations in YA books and in A Midsummer Night’s Dream. They have interesting personalities. Titania is more regal, kind and level-headed. Oberon is a goofball with a … desire for punishment.

Chise and Elias had more development where backstory is concerned, but they change very little in this volume. However, I find Elias even more endearing with what he chooses to say.

Renfred: Don’t you care if she fails and gets eaten alive?

Elias: I have no intention of allowing her to die. She was terribly expensive, after all.

The characters who do develop largely are the antagonists from the end of the previous book. These antagonists are Alchemists, the scientists of magic who turn their physical energy into magic. Renfred and Alice, master and apprentice, serve an evil person and try to fulfill that person’s orders.

There were two major subplots in this story. The middle was less about its own story line and more about presenting a reason for Elias to want to marry Chise that doesn’t make him look power hungry.

Yamazaki’s artwork is beautiful as always. She knows how to draw beautiful detail and how to make something creepy look wondrous. Also, each of her characters are uniquely drawn, and it’s easy to tell them apart and get a sense of their personalities.

This is a series that I think would be hard to jump into without reading the first book. After you do that, it’s a good continuation.

2 thoughts on “The Ancient Magus’ Bride, Vol. 2, by Kore Yamazaki”