This is an old topic from Pages Unbound Reviews’ Classic Remarks. Because I spent this whole Summer semester reading and discussing Paradise Lost by John Milton, I can finally answer the question.

Let me preface this with that I was mad that the epic didn’t end with Satan. I think the story is more about him and less about mankind. He is the hero of this story. 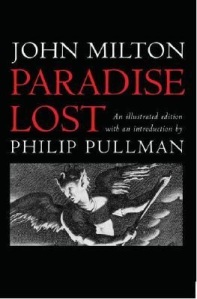 In the first couple of books, Satan is revealed to be a cunning and prideful individual. He spends most of Book I trying to save face and rally the fallen troops (Milton 1.84-124). It wouldn’t do for him to lose the support he already has in this new world that he could rule. He needs to convince his weary followers to continue the fight. He describes Heaven as a “Tyranny” (1.124) and explains what they have not yet lost (1.105-9) in their “eternal Warr” (1.121). This speech is very persuasive. He is even more persuasive and cunning in Book II when he had Beelzebub present his idea for the next retaliation against God (2.379-80). Then when there would be no volunteers to make this treacherous journey, he volunteered to make that journey so that he would “[win] cheap the high repute / Which he through hazard huge must earn” (2.472-3). He is already made himself a monarch of Hell, but he demonstrates leadership to the other fallen angels by facing the danger himself. He leads by example. These qualities all serve to persuade us to sympathize with him.

While those traits help build his character, the self that he only shows alone is what makes him more sympathetic. Once he reaches the threshold of Heaven, he “sighs” (4.31) and ponders over seeking forgiveness and his insincerity about repentance and decides to continue his course (4.32-113). This is a mask that he has not shown to his fellow fallen, and this helps us understand his motivations and realizations of his own character. He also goes through another physical transformation after he tempts Man and boasts of his success in Hell (10.460-509). He is transformed into “A monstrous Serpent on his Belly prone” (10.514) for tempting Eve and Adam.

Briana, in her answer to this question, argues that it was not intended that readers sympathize with Satan. That is likely the truth, but it can still be derived from the text that Satan is a sympathetic character. Whatever an author may intend for readers to take away from their writing does not mean that readers will read or interpret the book that way. I see Satan from Paradise Lost as a sympathetic character from the first page, and I am more invested in what he is doing than what mankind is doing. Satan is a dynamic character that is ultimately relatable.

What do you think of Satan from Paradise Lost?

6 thoughts on “Do you think Satan from Paradise Lost is at all a sympathetic character?”