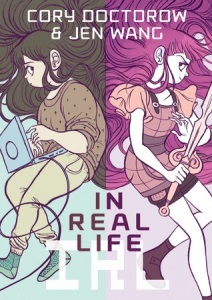 One day in a programming class in Flagstaff, Arizona, a guest speaker visits to get the girls in the class to play as female characters in Coarsegold Online. Anda Bridge decides to play the game and quickly levels up in her guild by killing gold farmers for money. She meets a gold farmer, a person who illegally collects rare items and sells them to other players, from China and learns that life isn’t easy for everyone. In Real Life, by Cory Doctorow and illustrated by Jen Wang, examines a culture clash, workers’ rights, and a black market.

I haven’t seen this book in a couple of years, but I remember there being a little hype around it when it came out. Because of that, I checked it out from the library. I was excited, after reading the introduction, by the prospect of incorporating economics as something for readers to think about, which it was. It just wasn’t satisfying and never got into decisions based on money. The graphic novel is unrealistic, predictable and lacked character development.

The two main characters are Anda Bridge and Raymond. Anda is the leading lady and the most developed character. She learns about a side to gaming she didn’t know existed and makes a couple of online friends. She has a side issue going with a prep from school, but it has much less importance than it tries to make itself out to be. Raymond is the Chinese boy that she meets. All we know about him is what he does for work, that he’s trying to learn English, and that he is easily swayed by strange American girls he meets online. Nothing else is learned about him, and he seems to learn nothing in the experience of this book.

Then we have the other flat characters who have small roles in the overall story. Anda’s parents are flat characters, but the my-parents-don’t-understand-the-internet trope was tired and unsurprising in the unrealistic behaviors of the parents, concerning her game play. Lucy, a.k.a. Sarge, is the in-game mentor and introduces Anda to the world of killing gold farmers. She should be more important since she is part of the conflict, but she sticks to one persona. These characters could have deepened the plot if they had been much more developed.

The problem with this book is that it’s a little too on the nose about helping others and giving workers their rights. They’re great ideas, but it comes across like an extremely moralistic kids’ show in that respect. There is only one plot, and it was very straightforward and was bound to have a happy ending.

The art style is great, and it looks similar to a few of the other middle grade graphic novels that I have seen and read. It’s colorful, and I love that Wang is consistent with her color schemes for each panel. It bothers me that the art in the game is the same as real life, implying that the characters are photo-realistic. Maybe this emphasizes the “real lives” of some people are also on a virtual plane. I’m also annoyed that the all of the gold farmers, who all appear to be Chinese in the book, are all pixies. The only time that changes is when Raymond appears again at the end as a human.

One of the details that bothered me was when Anda used a translator, like Google Translate, that perfectly translated English to Chinese and vice versa. Translation programs aren’t perfect, and I highly doubt that Anda found one that was good for English-to-Chinese translation. It wasn’t even hinted at as being a potential issue, especially for the protagonist studying programming. On top of that, I don’t see how he learned a lot of English from her when most of their conversations were in Chinese.

There is one more thing to consider: it is adapted from Doctorow’s 2004 short story, “Anda’s Game.” This short story has totally different settings from the graphic novel. Anda is stationed in the U.K. instead of Arizona, and Raymond is in Tijuana instead of China. It also goes deeper into the themes of workers’ rights and economics and has more character development than the graphic novel adaptation. I can’t say I like the short story better, partly because of some commentary from the narrator about Anda describing Sarge’s chest in such an unrealistic way. In some ways, it’s as lackluster as the graphic novel.

The graphic novel adaptation of “Anda’s Game” is okay, but it has a simple plot, very little character development, and weak themes. It also sucks for predictability. I recommend reading In Real Life if you’re bored or if you liked the short story it’s based on.