It’s the first Saturday of the month, and that means it’s time for Six Degrees of Separation. It took a surprisingly Halloween-related turn. In case you don’t know, 6 Degrees of Separation, hosted by hosted by Kate @ Booksaremyfavoriteandbest, is where we connect the book Kate gives us to six other books. You can follow the activity on Twitter with the hashtag #6Degrees. 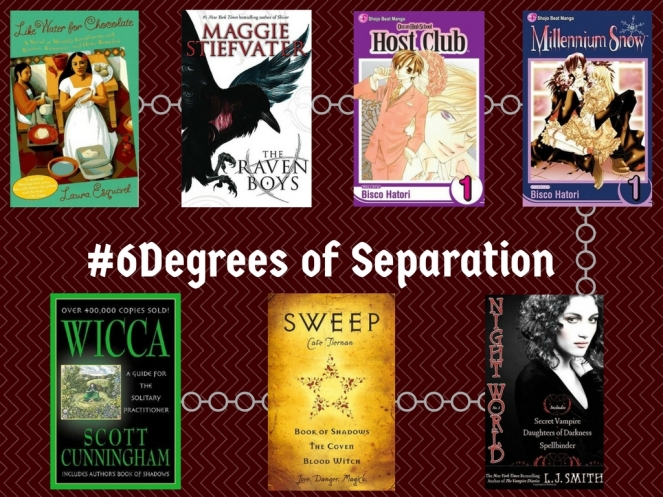 Starting the chain this week, Like Water for Chocolate, by Laura Esquivel, stars Tita, the youngest daughter of the De La Garza family. She is forbidden from marrying (and falls in love, of course) and must care for her mother until she dies. Similarly, Blue Sargent from The Raven Boys, by Maggie Stiefvater, is cursed with the knowledge that she will kill her true love with a kiss, basically forbidding her from marrying him.

The Raven Boys reminds me of Ouran High School Host Club, Vol. 1, by Bisco Hatori, in that it features a bunch of boys from a private school and one girl who is generally happy with her quirks. Bisco Hatori also wrote Millenium Snow, Vol. 1, which is a manga about a girl with a medical condition that will kill her. A vampire could save her. This plot line is like that of L.J. Smith’s Secret Vampire. This novel is about Poppy who was diagnosed with, I believe, pancreatic cancer and was destined to die. Luckily for her, her crush, James, saves her life by turning her into a vampire.

I read Secret Vampire in the first volume of the Night World omnibus, like I read all three novels in the first volume of Sweep by Cate Tiernan. It’s one of these books where the new guy comes to town and shakes up the leading girl’s (Morgan) world with his view on the world, which sort of upsets her parents. He introduces her and few others from their high school to Wicca, which leads Morgan to discovering she has strong powers. That’s where we go into fantasy. One of the first Wiccan nonfiction books I read was Scott Cunningham’s Wicca: A Guide for the Solitary Practitioner.