Welcome back to another 6 Degrees of Separation, hosted by hosted by Kate @ Booksaremyfavoriteandbest, where we connect the book Kate gives us to six other books. You can follow the activity on Twitter with the hashtag #6Degrees. 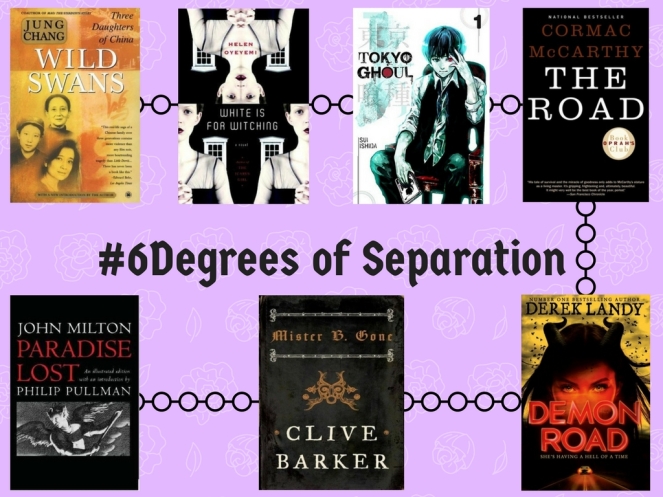 Miranda Silver has pica, a disorder where one craves things that aren’t food (non-nutritive substances, like plaster). Similarly, Ken Kaneki of Tokyo Ghoul, Vol. 1, by Sui Ishida, finds normal food inedible and disgusting after receiving the organs of a Ghoul in a transplant, making him only able to eat human flesh. There is a scene in The Road, by Cormac McCarthy, that shows a group of cannibals collecting people to eat.

Another book featuring a road is Demon Road by Derek Landy. The similarity of having demons in it brings me to Clive Barker’s Mister B. Gone, which is about a demon, Jakabob Botch, who escapes the tortures of Hell. Satan does this too in Paradise Lost, by John Milton.

From two stories about generations of women to tales of demons, this post shows that Wild Swans is separated six degrees from Paradise Lost. What does your chain look like, starting with Wild Swans?