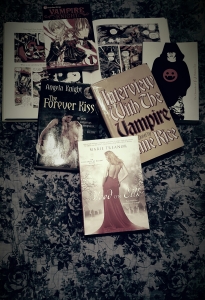 I finished re-categorizing my reviews into their proper genres. While I was re-categorizing my reviews under a new genre, I ran into the vampire books. The problem I have is that most of the vampire books are categorized as “paranormal,” and that is not a genre that I made a category. My dilemma then is whether vampires make a book fantasy or science fiction. Now, I am not forcing myself to place each book firmly into only one genre, but I do not want to mark all of the vampire books as both modern fantasy and science fiction. Keeping this in mind, when do vampires belong in fantasy and when do they belong in science fiction?

Lauren Davis’ article “When Are Vampire Stories Science Fiction” delineates certain ways that make vampires science fiction. She breaks it down as:

I agree with Peeps, but I disagree with the Sookie Stackhouse mysteries/True Blood. The problem with that series is that there are other beings that are strictly fantasy: fairies, witches, and shapeshifters. The way their powers work and some multi-dimensional adventures makes that series fantasy in my book.

Because I have that specific disagreement with the Sookie Stackhouse series, I have considered other elements within the book that make it specifically one or the other. When I think of City of Ashes by Cassandra Clare or the Vampire Academy series by Richelle Mead, there are other fantastical creatures and these powers have no sci-fi explanation. I suppose the key for these books is to determine what other creatures exist in the universe and how the magical aspects work. Vampires themselves don’t necessarily determine whether the book is fantasy or science fiction.

I’m still on the fence about the psychic vampire in L.J. Smith’s Dark Visions trilogy. I have not reviewed it on this blog because I read it a couple of years ago. There’s a sci-fi element of an institution trying to hunt the characters down, but I suppose most of the psychic powers would be classified as fantastical.

Do you think vampires make a book science fiction or fantasy, or do you think it’s easier to throw all vampires under the paranormal subgenre? Do you have examples other than Peeps of sci-fi vampires?

12 thoughts on “When Are Vampires Fantasy or Science Fiction?”