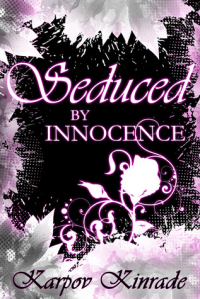 All my life I’ve been told that I will kill my first love. That the dark power I harbor within myself will destroy him.

Witches take an oath to do no harm, but I broke that oath even as a child, and so I hide within the invisible walls of my strange coven, keeping everyone at a distance.

Until I meet Derek.

His magnetism draws me in even as I know I should run. But I can’t run, because I need him to teach me how to defend myself and others, so I don’t fall victim to the shifters out to terrorize my coven.

He can’t know my secret, and I can’t give in to the other need that’s growing between us, the one that heats me from within whenever we’re together.

But flesh is weaker than intention, and neither of us can fight the fates. If only we’d known the truth before taking that first bite of forbidden fruit.

When I purchased Karpov Kinrade’s Seduced by Innocence, I believed it would be a good romance. But of course, you get what you pay for when it’s free.

At first, I thought the quotes from “Romeo and Juliet” were coincidental. After five chapters, I knew where this was going. Ignoring the predictable plotline, the author failed at creating a subplot. That makes this about one and a half plots. The sad part is that for the obvious allegory to “Romeo and Juliet,” it wasn’t as tragic as it could have been.

The several diary entries are never really explained. There is never a mention of a diary otherwise in the ebook. Personally, the diary would have added some interest if someone else had stumbled upon it. The diary never showed anything that added more to the story. What is that lesson from English class? Show, don’t tell. Only two characters are round. Ocean is the only other character who had a chance to be round, but her rebelling against the coven was already in her personality.

I can live with Derek and Rose falling in love at first sight. I can’t live with the sudden sexual activity. This does not take place in Vegas! For Rose’s growing up sheltered, that moved much too quickly. She didn’t seem to have a rebellious streak before then. Worse, when Rose admits and realizes that her mother is using her, she does nothing to stop it. She never fought back. The ending could have been better if Rose would have killed her mother or Blake with her powers. It still would be cliché, but I would have had a little more satisfaction.

Here are some more problems with Rose:

Rainbow and Blake also need to get a grip. Their plotting will end badly for everyone except Rainbow. She’s evil.

For the record, there was nothing innocent about the relationship between Derek and Rose. The only thing about innocence was at the end when Derek and his father were discussing her innocence in harming Dean, Derek’s brother. Derek determined she was in the wrong, but didn’t understand the situation surrounding and leading up to the point where she removed Dean’s soul from his body.

I don’t recommend this book. I find it annoyingly cliche and flat. I refuse to read the rest of the trilogy – saga, whatever – and will delete this book from my library immediately.

One thought on “Seduced by Innocence by Karpov Kinrade”