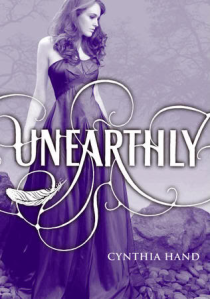 Unearthly was written by Cynthia Hand. It is the first book in the Unearthly series.

Clara Gardner is one quarter angel, a Quartarius. At the beginning of the book, she is living in California with her mother and her brother. Then, she starts receiving visions of her mission. Clara and her half-angel mother piece together the visions to figure out that her mission is in Jackson Hole Wyoming. Her mother uproots the entire family and moves them to Jack Hole. While there, she meets the young man, Christian, who she is supposed to save in her vision. Along the way, she makes some friends: Wendy, Angela, Christian (to an extent), and Tucker. Wendy and Tucker are siblings. Angela is a Dimidius (half angel) who learns about angel bloods with Clara. As the story progresses, Clara becomes romantically drawn to Christian and Tucker, learns of a conflict with fallen angels, and tries to discover her purpose on Earth.

We have been in a short period of an angel/demon fad. This book happens to be one of them, so it is wise to tread carefully.

It is different to read that there are partial angels that aren’t labeled as Nephilim. It’s also interesting that they each have special missions. The one problem I have with this logic is that we generally assume that you know your mission is complete after you die. Why don’t their missions come when they are later into adulthood?

Clara doesn’t find out about Black Wings (demons/fallen angels) until she meets Angela. If Angela was the result of a fallen angel raping her mother, wouldn’t it make sense for the fallen angel parent to come back for her so that she would become evil? Or even raise her himself? The piece that is really the most thought-provoking is that the Black Wings always feel sorrow for cutting themselves away from the Lord.

It does leave you with some questions. Maybe they will be answered in Hallowed, maybe not. The story is fast-paced and definitely follows the average teen mind. It’s perfect for a teenager to read, but an adult may grow somewhat bored with the story. This is by no means a Christian fiction.