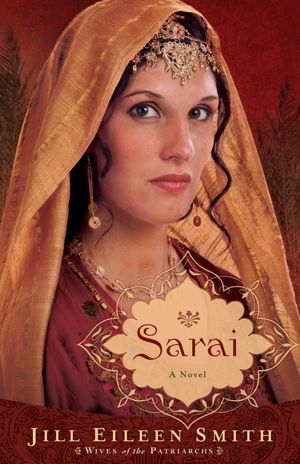 Sarai: A Novel by Jill Eileen Smith is part of the series: Wives of the Patriarchs. It is a retelling of the Story of Abraham, Sarah, and Hagar. It also includes Lot of Sodom. Being this way, one only has to read the Bible or the Tanakh to figure out how this is going to end.

It starts out in Ur. Abram asks for the hand of his half-sister, Sarai. She agrees to the marriage so long as he vows to never take another wife so long as she lives. Their father only agrees to the deal and marriage after he makes Sarai promise to produce an heir–if the promise goes unfulfilled, then Abram may take another wife. Sarai believes that this will be an easy task.

After several years, she finds that her womb is barren. As the story progresses, she becomes even more desperate. Melah, her niece and Lot’s wife, encourages her to give a sacrifice to Ningal, a pagan goddess, so that she may produce a child. Sarai finally agrees, against Abram’s wishes. She enters the temple flees without making a sacrifice, fearing the disapproval of Abram and Adonai. Meanwhile, Abram receives a revelation from Adonai that he must go to Canaan, leaving his father’s house forever. He listens and sells his home to his brother. Abram takes his flocks of sheep, supplies, Sarai, their father, and Lot’s family. On the way to Canaan, their father dies.

When they finally reach Canaan, they have to go to Egypt to survive a famine. During their stay in Egypt Sarai is stolen from Abram to become one of Pharoah’s wives. Pharoah finds out she was already married. He decided to let them keep the bride price, including selling his daughter, Hagar, into slavery (unbeknownst to Pharoah). They go back to Canaan, where Lot and his family eventually leave Abram and move to Sodom. While they are in Sodom, Sodom is attacked and they are taken prisoner. Abram gets news of this and rescues them.

Sarai reaches menopause. To fulfill her promise to Abram, she gives her maid, Hagar, to Abram so that he can have the heir Adonai promised them. Hagar conceives Ishmael, which makes Sarai jealous. Sarai’s actions against Hagar makes Hagar run away. Adonai commands Hagar to go back to Sarai and submit to her. Hagar does as she is commanded. Ishmael is born.

Years later, Adonai comes and renames Abram “Abraham” and Sarai “Sarah.” He also commands Abram to circumcise all of the males in his household. Then Adonai comes and tells Abraham that Sarah will give birth to an heir who shall be named “Isaac.”

Two of Adonai’s angels come to Lot’s home. They see the sin in Sodom, but find Lot’s family to be righteous. They told Lot’s family to come with them, so that they would not be destroyed with the city. The angels warned them not to look back. They ran for the nearest town, Zoar. Melah, Lot’s wife, looks back and is turned into a pillar of salt.

One year later, Sarah has given birth to Isaac. Abraham circumcises Isaac and still shows his love for Ishmael. Then, Abraham blessed Isaac and thanked God for His gift unto them.

There were several different view points in this story. I believe this makes the involved Bible stories more personal. It also makes me realize that none of the people were truly perfect or faithful. Sarah experienced the biggest transformation through the journey. Melah learned some, but she didn’t survive in the end. Hagar isn’t an evil woman either; she’s just a girl who has to deal with the cards she was dealt. All in all, what mattered for them was to believe in God, follow his commandments, and show love for one another.

I found this to be a great story, adding insight into a story I knew very little about. It’s not a book I would read more than once, though.